Tanya has recently finished the TiMband journey with her son, Oliver. Graduating with fantastic results, Tanya shares the journey they went through:

“Me and Oliver’s dad first noticed a flattening to Oliver’s head when he was 3 months old. This is something that we thought would improve by itself at the time, with Oliver being so young, but we kept our eye on it. However, we noticed that his head shape wasn’t improving over time, and it was at around 5 months old that we noticed it getting much worse. I started to do my own research, searching online for all of the possibilities that it could be. Plagiocephaly seemed to be the common answer. I researched a little more to get an understanding of what it actually was, and how we could help Oliver if he did have this. This is when I came across Technology in Motion and booked Oliver in for an assessment.”

Tanya went on to look at Technology in Motion on Facebook and Instagram, feeling reassured by the videos, photos, and other parents going through the same thing, “I felt reassured that this was definitely the right path to take and that we weren’t alone. This is what also helped me to go ahead and book an assessment with Technology in Motion. At the assessment, we were told that Oliver had severe left plagiocephaly and that he would need a TiMband helmet. I was feeling a mixture of emotions after hearing this, however, Sadie and Steve were so unbelievably reassuring. They explained everything in detail to us and took us through everything step by step, answering all of my questions along the way.”

Tanya explains that Oliver’s journey went very smoothly, but had a few bumps along the way: “Oliver got Norovirus a couple of weeks into his treatment. The helmet was still relatively new to us and so I contacted Steve. He advised me to keep Oliver in a light layer of clothing or preferably just a nappy, and to take Oliver’s helmet off until his temperature regulated.”

As well as this, the family had a few struggles during the warm temperatures: “Oliver used to get quite hot and irritated, and got heat rashes on his face and head. He would sometimes pull at his helmet. But as said above, with the constant help and advice from Steve and the rest of the staff, we succeeded in keeping Oliver cool and comfortable throughout his treatment. As a mother, I was so worried about it all. I was overthinking every little detail and now looking back, I don’t know what I was worrying about, Oliver was great with his helmet all the way through his treatment, and he pretty much took to it straight away with barely any problems at all.”

Oliver completed the treatment with excellent results. Mum Tanya explains: “Both me and Oliver’s dad are over the moon with the results and we cannot thank Technology in Motion enough for all of their help and support. Oliver graduated from his helmet after only wearing it for 5 months. He came to Technology in Motion with severe left plagiocephaly with an asymmetry of 28mm, and graduated with mild left plagiocephaly with an asymmetry of 8mm. What is more amazing is Oliver had a worryingly large bulge to the left side of his skull, which I did not think could be corrected. However, I was proven wrong and the helmet worked its magic – the front of Oliver’s head is now perfectly round!”

Little Oliver is now doing brilliantly, “Oliver is doing great and, although the helmet was no trouble at all, he’s probably glad to be back to being his normal self again – as we are too! However, I must say, his helmet became a part of him. A part of us actually misses him wearing it, it feels so strange to see him without it permanently on, it’s like something is missing! But we are so proud of him. I didn’t know how I would feel along the way of Oliver’s journey, but now I can honestly say I am so glad we went ahead with the treatment. Our son’s future is what matters the most to us and the TiMband helmet, along with the team at Technology in Motion, has certainly contributed to his future. I cannot recommend Technology in Motion enough and I would encourage any parent with their suspicions regarding their baby’s head to at least book in for an assessment, you will most definitely be in the right hands – as a team, they are the most welcoming, caring and understanding group of people you will ever probably come across!” 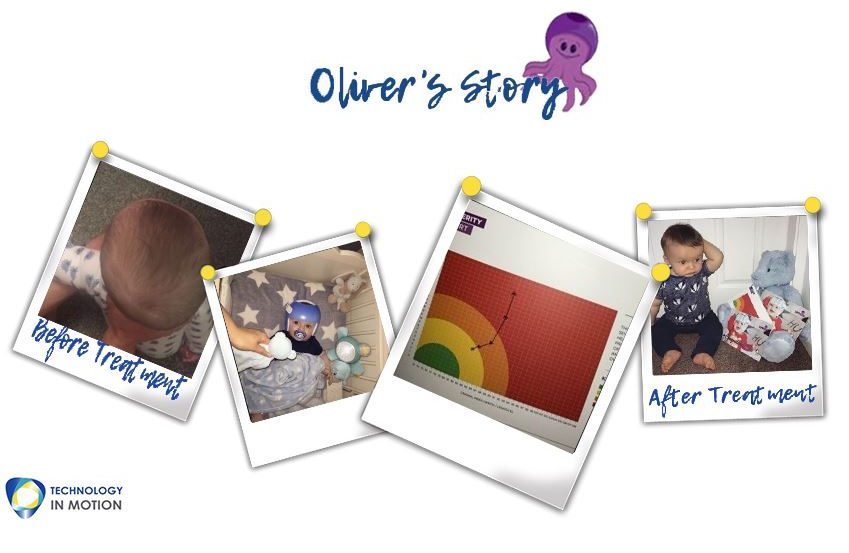