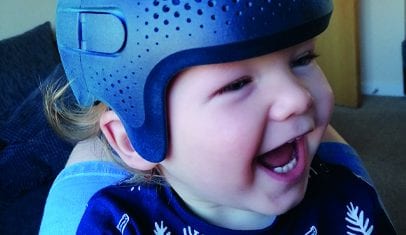 I first noticed my son’s head wasn’t quite the ‘normal’ shape when he was about 5-6 months old. Being a mother of two meant that my youngest often spent time in the safety of his bouncer chair whilst my 3 year old was running around, I thought this was the safest option.
But at 5 months old, I noticed that Lucas had a favoured side whilst he slept. This was also the side I would always hold him whilst he fed and one day whilst my husband was feeding him I noticed that he had a flattened side to his head.

I immediately turned to Google and read about repositioning. Lucas still wasn’t sitting up at this point and I told myself that when he started sitting up that his head would round off naturally. Friends and family told me that it was barely noticeable and not to worry, but I did worry.
I tried the repositioning techniques and encouraged as much tummy time as I could but the shape of his head didn’t seem to get better.
I felt such guilt as a mother that I had let this happen.

Then, a while later, a friend of mine posted on social media about how her daughter started wearing a helmet, so I sent her a message and she told me all about Technology in Motion. I can’t believe I’d never heard of this treatment before! I then did my own research and finally realised that there was something that could be done.

Even though everyone told me that the shape of his head was hardly noticeable, I knew that it would be an issue as he grows up and I didn’t want to regret not having tried everything. So, when he was 10months old I booked him in for a free assessment. Unfortunately his appointment was delayed due to the pandemic and by the time he was seen he was 13months old.

After his assessment with Sandie Waddell we were told that he had a severe plagiocephaly.

It was worse than I expected it to be but despite he age, Sandie assured us that she was confident the helmet would make a significant improvement. So we decided there and then to go for it.

He was fitted a week later and took to it so well! He barely noticed he was wearing it and I was so relieved.

At his first check up 2 weeks later he jumped straight into the moderate bracket and we were elated.

At every check up we saw an improvement and after just 5 months his treatment came to an end and we are overjoyed with the results. I’m no longer worried about him having any issues in later life. I simply love the shape of his head.

I was concerned at first that the helmet was too invasive and that it was cause him too much irritation but honestly, for him the helmet was never an issue. He took to it so quickly.

Getting the helmet was simply the best decision we’ve made. 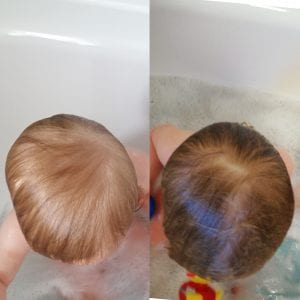