From the setbacks to the celebrations, Nicola, mother of adorable baby Jenson, describes her little man’s plagiocephaly journey:

Jenson has always been a good sleeper, too good in fact. However, what we didn’t know was that his sleep was affecting his head shape!

At 8 weeks, my mum was changing Jenson and in a shocked voice said “Oh Nicola have you seen this? His head looks funny!” On closer inspection I was mortified that, firstly, I hadn’t noticed and, secondly, his head was very flat on the right side! “What do I do?!” I thought. I turned to Google and soon came across the condition plagiochephaly.

I immediately booked an appointment with my GP to check his head and to see what we could do to help him. My GP didn’t seem at all bothered and I was told it would round out on its own. “That is fair enough”, I thought, “but his head is really flat now! Is this going to correct itself?”

So to Google again I went. After a few minutes searching, I stumbled upon Technology in Motion (oh the relief!). I was happy to find that something could be done, despite having to wait until Jenson was 4 months old to be assessed.

I continued trying to reposition Jenson and bought a special pillow to help him. However, nothing changed. So, back to the doctors I went. This time, I was referred to the paediatrician. The doctor checked Jenson’s head and told me that as soon as he started to move about, his head would round out on its own. Again, I left the doctor’s fraught with worry!

So, I finally gathered up the courage to accept that there was an issue and contacted Technology in Motion. I spoke to Doug who was very reassuring and told me to contact them again when Jenson was around the 4 month mark. When Jenson was 4 months old, I called back and spoke to Lisa who, again, was brilliant and very reassuring! I booked the appointment for our first consultation there and then.

After our initial assessment, we were told that Jenson had severe plagiocephaly and, although we could continue repositioning, his head may stay flat! After a look at the helmets and a good natter with Sandie (one of Technology in Motion’s orthotists), we decided to give Jenson another month before going ahead to see if his head shape may improve on its own. When we went back, it had, but only by 1mm and his brachycephaly had worsened! We immediately booked the treatment and the TiMband was fitted exactly 2 weeks later.

I was a wreck on the day of the fitting. “Will it hurt him?”, I thought, “Is he going to be OK? Are we doing the right thing?”. Despite some tears and sleepless nights, Jenson took to the helmet really well and after 1 week he had improved by 5mm!!! We were elated!

The support we received throughout treatment was the best. Sandie gave me her mobile number and I was invited to join the support group on Facebook which was a real life saver (hearing about all of the other families going through the same thing gave me so much reassurance!). We had regular check-ups and Jenson’s head shape improved each time! Towards the end, the improvements did slow down slightly, but that didn’t bother us, it was still working!

Jenson wore his TiMband for 5 months and, yesterday, he graduated! His measurements at the start of treatment were 18mm and 96% and now he is 1mm and 86%! We cannot believe how much he has improved!

We are forever in debt to Technology in Motion. They were the ears that listened when the NHS turned us away saying Jenson’s plagiocephaly was just cosmetic!!!! Each time we went for a check-up, it was like visiting family, Sandie was great and always so positive and reassuring. Jenson was always smiling in his helmet and people always said how cute he looked in it! We are just amazed!!!!! Thank you Technology in Motion! 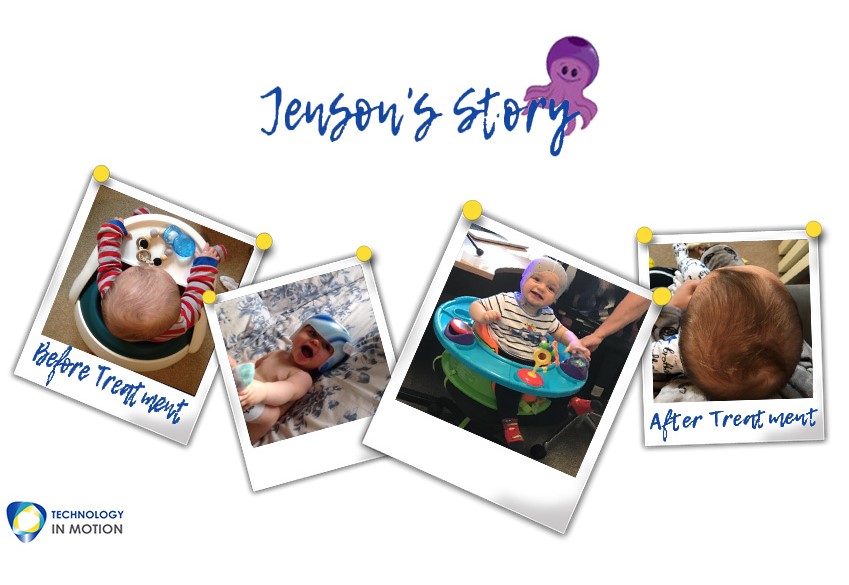