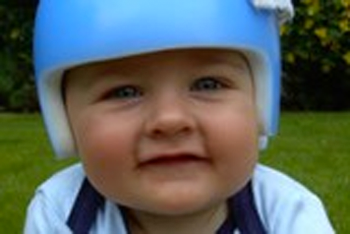 Harrogate Mum, Linzi, has been raising funds for her eight-month-old baby son, Jake, who suffers from flat head syndrome, a condition also known as Plagiocephaly.

Thirty-six-year-old, Linzi, who has two other children, began her plea for help from the local community over six weeks ago. She needed to raise nearly £2,000 to be able to take Jake to the Technology in Motion Clinic in Leeds to have a special helmet fitted that is proven to correct the condition.

Six weeks on, a triumphant Linzi has managed to raise a fantastic £2,500 and has set up a fund at the clinic to help other parents who are faced with the same dilemma as her and husband Paul.

She said; “We have arranged so many activities over the last few weeks including a sponsored walk, cake sale, and a number of raffles. We have been touched by the generous spirit of the people of Harrogate.

“We have exceeded our target and wanted to offer the remaining money to other families who were struggling to find the money for a treatment programme. Currently the NHS does not fund treatment for the condition that affects one in 30 babies across the country.”

At just three weeks old, Linzi noticed that her son’s head was flat on one side. Linzi expressed her concern to the midwife, who advised her that she was sure it would correct itself and not to worry too much about it.

Linzi said: “My husband and I started to become increasingly concerned as Jake’s head shape did not improve with time, so we decided to take him to see our local GP. After a little gentle persuasion, our doctor agreed to refer Jake to a paediatrician at Harrogate General.”

It was here that Linzi and Paul were told that Jake was suffering from Plagiocephaly (a flattening of the head on one side). They were advised not to worry about the condition, and told that once his hair started to grow nobody would notice that his head was misshapen.

Hugely dissatisfied with this approach, the Walkers turned to the internet for research and friends with babies for support. Online, Mum Linzi learnt more about the condition and the cranial remoulding treatment available.

She added: “The Internet was a tremendous resource. I found out about a private clinic in Leeds called Technology in Motion and decided to make an appointment for Jake. When we met the team of experts we felt immediately at ease and there was never any doubt we were going to do our utmost to be able to provide Jake with the treatment. Every parent wants their baby to be perfect – we didn’t want Jake to face problems later in life, such as bullying.”

Jake is in week five of his treatment programme. He has to wear the helmet 23 hours a day but has taken to it very well. The team of clinicians have already seen improvements in his head shape.

Sandie Waddell who is treating Jake commented: “Jake began treatment and had severe Plagiocephaly after only two months in treatment there has been a significant improvement in Jake’s head shape and I would now consider Jake to have a moderate Plagiocephaly. Jake is a lovely little boy and has taken to the treatment very well. I am extremely pleased with his progress and would expect the treatment to be finished within the next three months.”

Linzi concluded: “Paul and I are very keen to raise awareness of the condition, so that other parents realise that there is help out there. We hope the remainder of the money we raised can help another local family who needs the treatment.”