“We first noticed the flattening at about 3 months. We were going to NHS physio with Daniel’s Torticollis, and so asked the physio about his flattening. They told us it would improve once Daniel’s Torticollis had improved. However, when we saw no improvement, we approached a health visitor about his flattening several times. They advised us that Plagiocephaly helmets didn’t work and initially, we believed them.”

Despite the advice they had been given, Rebecca and her husband weren’t satisfied; “My husband was more concerned than me; I work for the NHS and so chose to believe their advice. But my husband did some research on the internet and came across Technology in Motion. He booked our initial appointment.”

Naturally, Rebecca was a little worried and uncertain at first. However, she found comfort in talking to someone going through the same thing, ‘By luck, another baby in our sensory class had a helmet from Technology in Motion. Talking to his mum reassured me and gave me the confidence to pursue.” After identifying that Daniel had both Plagiocephaly and Brachycephaly, Rebecca and her husband chose to go ahead with the TiMband treatment.

From then onwards, Daniel had a smooth journey. “We were really lucky and didn’t have many problems during the journey. Daniel experienced occasional sore patches on his cheek and above his ear, but Sudocrem sorted this out. We didn’t make Daniel wear the helmet during a holiday abroad as it was too hot, but he wore it every night whilst on holiday”.

Daniel’s treatment lasted 5 months, “We are so happy we did it. His results are good but we can still see a flat spot; we are frustrated we didn’t start treatment earlier as the results would have been even better. It’s only been off a couple of weeks but he didn’t even notice that it’s gone. It’s literally like he wasn’t bothered if it was on or off – so lucky!” 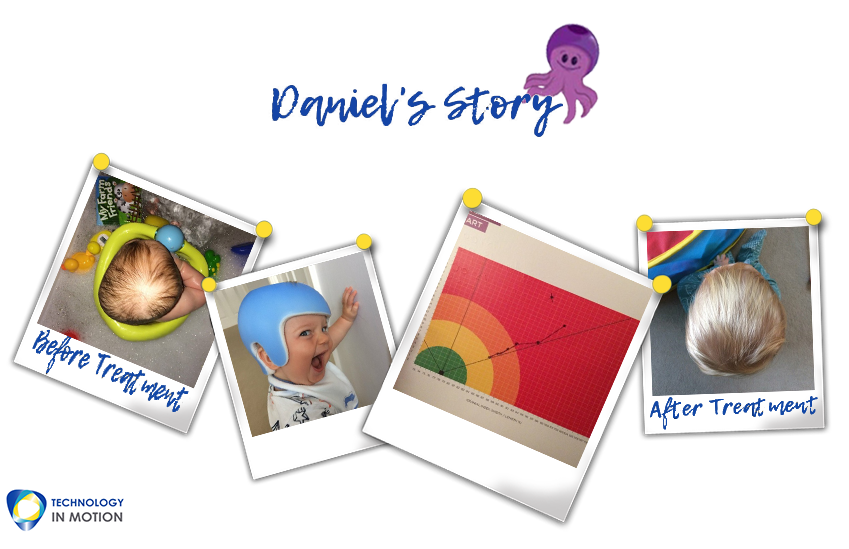