We initially noticed there was something wrong with Ardle’s neck when he was 4 weeks old. However, he wasn’t officially diagnosed with flat head syndrome until he was seen at the Royal Hospital for Sick Children in Glasgow when he was just under 4 months old.   At approximately 8 weeks old, when it became clear he had a wonky head shape, I sought information online and we received treatment from a chiropractor, osteopath and NHS physiotherapy. We tried repositioning techniques and undertook exercises for his neck.

As previous attempts appeared ineffectual, I trawled the internet every evening when the boys were asleep looking for solutions to help resolve Ardle’s head shape.  I came across the Technology in Motion website and new instantly it was for us.  We took the view that it was better to try something than do nothing. The last thing we wanted was grown-up Ardle to accuse us of doing nothing to fix his head shape. I didn’t want to live with regret.

At his assessment, Ardle was diagnosed with plagiocephaly and severe brachycephaly.  His journey was a very smooth one, with slow and steady progress and next to no problems throughout.  Ardle took to the helmet instantly and pretty much sailed through the whole experience, only suffering with the odd slight redness which resolved with a little cream.

We were very lucky not to come across any negativity. If people stared at Ardle (which they did), we quickly told them why he wore a helmet and they soon understood, astonished that this form of treatment is not funded by the NHS.  Everyone supported us.

We are absolutely delighted with the results! Baby Ardle ended up in the green portion of the plagiocephaly severity chart and we couldn’t be happier.

Today, Ardle is doing brilliantly. He is the cheekiest, most adorable, wee lad and is loved by all that know him. He was diagnosed with scoliosis last year but he does not let that hold him back from doing anything.   He turned 2 last week and, unlike at the 8/9/10 month mark when our paediatric consultant was slightly concerned about his development (he couldn’t crawl, sit up etc. at the normal age), there is now no doubt that he has caught up – he can count from 1 to 10 quicker than his (almost) 4 year old big brother! 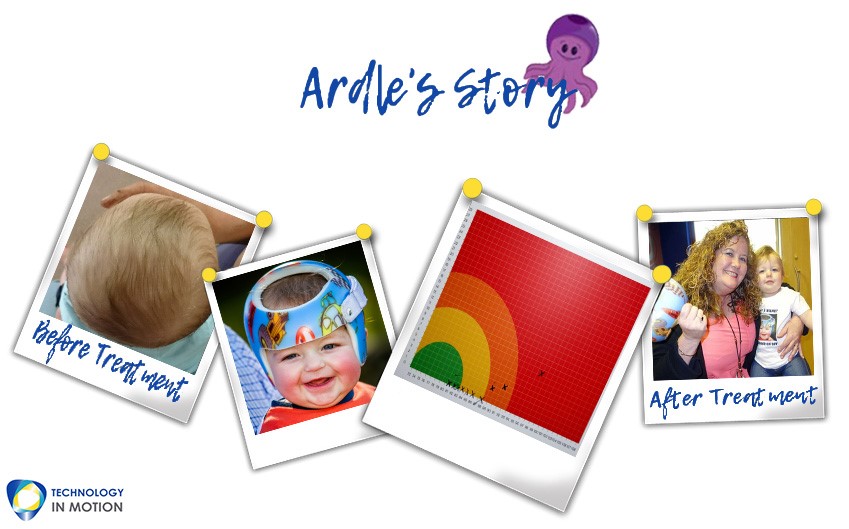