Nottingham mum, Stacey, knew that her daughter’s Plagiocephaly needed to be treated in order for it to get better. Stacey talks us through Annaïs’ journey with both Plagiocephaly and Torticollis:

“Annaïs was a twin and spent a lot of time upside down in the womb with little space.” As a result of this, Stacey noticed that her daughter was born with a misshapen head. Naturally, she thought this would correct itself now that Annaïs had more space out of the womb.

However, as can often be the case, Stacey noticed that Annaïs’ head shape was becoming flat on one side: “I asked my health visitor who said it was fine and would correct itself. By this point, she was 6 weeks old. By 8 weeks, she was struggling to hold her head up and held it to one side. I thought it was muscle strength, but one night I realised she actually was holding her head up, it just wasn’t straight.” It was then that Stacey knew something wasn’t quite right. She did some research and discovered that Torticollis and Plagiocephaly go hand in hand. Stacey rang her health visitor, only to find that she was unaware of the conditions. She then made an appointment with the doctor who gave her the diagnosis before referring her to a paediatrician.

Stacey still wasn’t satisfied – her experience with having five children told her that something was wrong: “By this time, her ear had shifted, her forehead bulged, and one eye was bigger than the other. I researched torticollis exercises and started doing them myself.”

As a result of more research, Stacey came across information explaining that the NHS don’t treat Plagiocephaly, and all of the information stating that it doesn’t always self-correct. Her instinct was that Annaïs had severe Plagiocephaly, and she was concerned as her daughter would be 6 months old when she saw the paediatrician, let alone how old she would be when referred to the physiotherapist.

Stacey and her family went ahead with the TiMband treatment for Annaïs. “My daughter had eczema as a result of general allergies, which was double whammied when it was hot. We had to take her helmet off a few times to let her eczema heal, but other than that we had no problems.”

Despite this slight setback, Stacey is extremely happy with the results: “We are over the moon visually. I was really pleased with the results after 6 weeks where she was in the mid-orange. I would have been happy with that, but she got into the yellow at the end of treatment. I think she misses the helmet as I find that she wraps blankets around her head at night.” 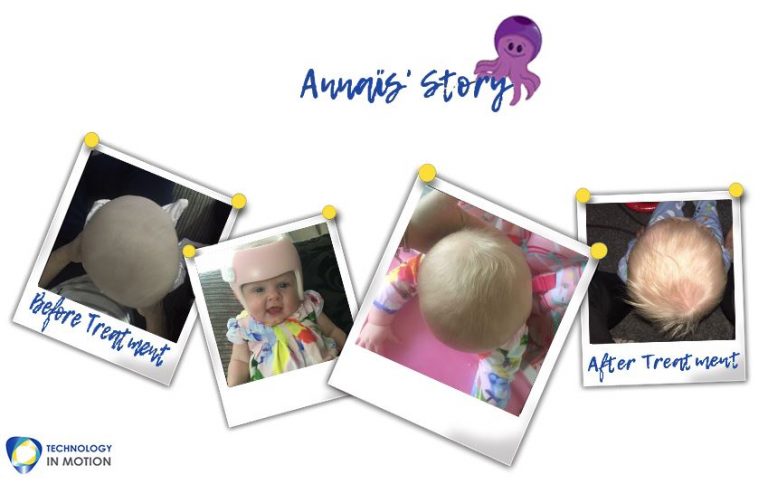