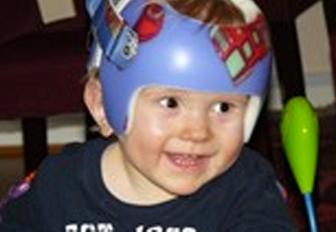 West Hampstead baby Alexander suffers from a condition called Plagiocephaly, also known as flat head syndrome. His parents, Maria and Morten, are keen to raise awareness of treatment available for the condition in the UK.

Alexander is Maria’s second child. He was born weighing in at a very healthy 10lbs and 10oz. Maria noticed that her newborn baby’s head was misshapen from a very early age.

“I mentioned it to the health visitor on several occasions, but I was told that it was likely to correct itself. She also said to ensure that Alexander spent plenty of time on his tummy. There were no improvements in the first few months, so we decided to share our concerns with our local GP. Admitting not having any expertise knowledge in the field, he then referred us on to a paediatrician.”

Maria and husband Morten took Alexander to see a children’s specialist based at The Portland Hospital. “He was concerned about the shape of Alexander’s skull and questioned whether or not Alexander might suffer from Craniosynostosis. We were then referred to a plastic surgeon. I have to admit my husband and I were both devastated at this point,” said Maria. “I was so worried for my baby – what was going to happen to him – the thought of his head being operated on was just terrifying.”

A CT scan was undertaken on Alexander and he was diagnosed with both Plagiocephaly and Brachycephaly (a flattening of the head on one side). The plastic surgeon advised the couple to continue using repositioning techniques and to come back and see him within three months if the condition hadn’t improved.

“We couldn’t help but worry – every parent wants their child to look perfect,” said Maria.

Three months later, and with no change to Alexander’s head shape, the couple went back to see the plastic surgeon. He reassured Maria and Morten saying that eventually in most cases the condition would correct itself with age but that there was always the option of cranial remoulding. But because this is not available on the NHS, he couldn’t refer Alexander.

Maria continued: “I did a lot of research on the Internet on the condition and read about other parents who were going through the same anguish as us. It was so comforting to read other people’s stories. It was online that I learnt more about cranial re-moulding and the treatments available.”

Initially Maria sent a list of questions to a clinic based in Wimbledon called Technology in Motion. “I was so impressed with their speed of response, I received an email back from a clinician at the Centre the same day,” remembers Maria. “We decided to make an appointment for Alexander to see one of the clinicians at the Centre. When we went, we immediately felt at ease with the staff – they assessed his condition and advised us that, due to his severe condition, he would definitely benefit from cranial remoulding treatment. Both of us agreed very quickly that we wanted Alexander to go through the treatment programme.

We took Alexander into the clinic to have a helmet fitted. I think we were more nervous about it than Alex, but he took to it like a duck to water – there were no issues at all. Alexander wore the helmet for just under six months and we could see fantastic progress within the first six weeks. He now has a head shape with a normal circumference.”

Maria continued: “We applied to our private health insurance company for funding for the treatment and, following some persistent correspondence, they agreed to pay half, which we of course were very happy about. However, I do wish that it were funded on the NHS. The cranial remoulding is currently seen purely as a cosmetic treatment, something we strongly disagree with. In Alexander’s case his condition was classed as severe. This actually means that normal head protection gear such as cycle helmets would not give him the protection required. Wanting to correct this has nothing to do with cosmetic looks but simply being able to offer our child a normal level of safety, now and in the years to come. We are so keen for other parents to be aware of the condition and to know of the excellent treatments – and sometimes funding – that is available for it.”

Sally Hews treated Alexander at the clinic in Wimbledon, she explained how the treatment works: “Cranial remoulding treatment works by channelling further growth in the flatter areas of the skull to form a more symmetrical head shape. The treatment usually lasts between three and six months.”

She added, “Deformational plagiocephaly is a common condition. Along with deformities to the back of the head, it can also cause asymmetry of facial features such as uneven eye and ear positioning. Problems in later life can include bullying at school, low self-esteem and dental problems caused by a misaligned jaw, as well as difficulty getting glasses and bike or riding hats to #fit properly.”