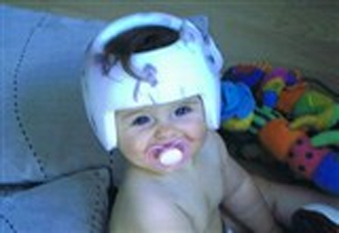 Aleece was born through caesarean section, without any further complications. As she grew, however, her mother Jillian noticed that her daughter preferred to sleep and play on her back. She never thought that this was an issue until at aged four months, Aleece’s head appeared to look like a rugby ball. “When people used the word ‘deformed’, I couldn’t help getting upset. I guess that I was blinded by love for Aleece and couldn’t really see the problem – I just didn’t want to face the fact that my little girl was less than perfect. We presumed that it would just sort itself out.”

Grandparents Eric and Christine had seen an article on the regional BBC website ‘Look North’, and brought up the subject of Plagiocephaly (also known as flat head syndrome) with Jillian. They then found information on our Orthotic Clinic in Leeds, which treats many cases of Plagiocephaly and other variants of flat head syndrome, using our unique Cranial Remoulding Helmet called the TiMBand.

After their first consultation at the centre, Jillian felt reassured that other parents faced the same dilemma, and that she wasn’t alone. It also became apparent that Aleece’s case was one of the most extreme to ever come into the centre, so Jillian decided that she wanted to go for the treatment. Naturally, she still had concerns: “I worried about what people would think of Aleece in her helmet, and even things that seem silly now such as not being able to stroke her hair or kiss her on the head. But I knew that this would be life changing for her and that we had to go through with it.”

Aleece’s treatment began at aged 7.5 months and ended just after she was a year old. Mum Jillian is more than happy with the results achieved. She says: “The Cranial Remoulding Helmet has given my daughter visually, a normal face shape and her ears no longer stick out. She would always have looked beautiful in my eyes, but now I receive so many compliments on what a beautiful little girl I have, and I never got that before. I could not have asked for a better outcome.”