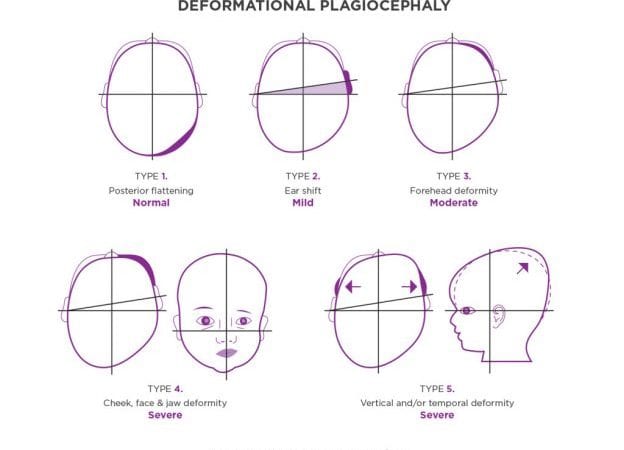 What is Deformational Plagiocephaly?

Deformational plagiocephaly, also referred to as positional plagiocephaly and flat head syndrome, is a condition upon which an infant’s skull appears flattened either at the back or to either side. This flattening is predominantly caused by continued external pressure to the skull when the infant lies with the head in the same position for prolonged lengths of time. However, other causes include: multiple, premature and assisted birth.

The prevalence of deformational plagiocephaly in infants has increased considerably over the past 25 years since the introduction of the 1992 Back to Sleep campaign. Now, half of all babies under the age of one suffer from the condition to some extent.

What are the Symptoms of Deformational Plagiocephaly?

The main symptom of deformational plagiocephaly is a flattening of one part of the skull. However, more severe cases of the condition can also cause secondary facial asymmetry with the ear, cheek and jaw being pushed forward on the flattened side.

Deformational plagiocephaly is assessed in two key ways: visually, by looking at the top of the head from above and physically, by taking measurements of the skull.

The severity of the condition can vary anywhere on the scale from mild to severe. Generally, infants with deformational plagiocephaly will fit into one or more of the following five types of head shape deformity:

Type 1: Severity – Normal. Slight flattening on one quadrant at the back of the head.
Advice: watch and reposition. No treatment required.

68% of infants have a head shape in this category.

Type 2: Severity – Mild. Similar symptoms to Type 1 plus ear shift on the same side as the flattening.
Advice: watch and reposition. See Physiotherapist or Osteopath to ensure that the neck muscles are OK and there is no sign of torticollis.

27% of infants have a head shape in this category.

Type 3: Severity – Moderate. Similar symptoms to Type 2 plus forehead deformity on the same side as the flattening.

Advice: watch and reposition. If over 5 months old this will probably not self-correct fully. TiMband treatment will correct this.

4% of infants have a head shape in this category.

Type 4: Severity – Severe. Similar symptoms to Type 3 plus cheek, face and jaw asymmetry. The eye on the flattened side will be more open than the other side.

Advice: this will not fully self-correct, TiMband treatment is recommended.

1% of infants have a head shape in this category.

Type 5: Severity – Severe. Similar symptoms to Type 4 plus asymmetric height displacement at the back of the head and/or bowing of the temple area on the affected side.

Advice: this will not fully self-correct, TiMband treatment is recommended.

1% of infants have a head shape in this category.

Why is it Important to Treat Deformational Plagiocephaly?

When left untreated, plagiocephaly can leave a child vulnerable to long term effects such as psychosocial problems and the inability to wear protective headgear and integrate into their peer group at school. To minimise such problems from developing, early identification and treatment are vital.

There is also a researched association with visual defects and developmental delay, but correction of the head shape will not necessarily improve these conditions.

Symptoms associated with deformational plagiocephaly begin to appear during the first few months of life. As treatment becomes less effective after the age of 14 months, it is important to seek help as soon as a flattening becomes noticeable. For peace of mind, Technology in Motion offers free, no-obligation plagiocephaly assessments to determine whether a child has the condition and to what severity.

To treat infants under the age of 4 months and those with milder forms of flattening, repositioning techniques are recommended. These techniques focus on the concept of ‘tummy time’, encouraging children to lie and play on their stomachs thus relieving pressure from the skull.

Moderate to severe levels of deformational plagiocephaly will not self-correct. In instances such as these, a corrective cranial helmet such as the TiMband can be prescribed. This helmet is specifically crafted to cradle the child’s head while gently encouraging it to mould back into its original, rounded shape. The time taken to treat deformational plagiocephaly varies depending on age and severity. However, infants usually wear their corrective helmet for an average of 3-6 months.

Research into the Condition of Deformational Plagiocephaly

How deformational plagiocephaly should be treated is hotly debated between medical professions. The NHS, for example, believes plagiocephaly to be a solely cosmetic issue which will correct itself over time or otherwise be covered as the child’s hair grows.  Conversely, one of the USA’s leading authorities in child health, The American Academy of Pediatrics, believes that helmet therapy demonstrates ‘more significant and faster improvement’ in infants suffering from the condition. In accordance with this, the majority of physicians agree that, in moderate to severe cases of plagiocephaly where repositioning techniques have proved ineffective, a corrective helmet should be prescribed.

Steve Mottram, managing director at Technology in Motion, has compiled a wealth of research pertaining to plagiocephaly and how to treat it. To read through these plagiocepahly research papers, click here.

How does Deformational Plagiocephaly Differ from Other Types of Flat Head Syndrome?

Deformational plagiocephaly is not the only type of head shape deformity. There are in fact three other conditions which cause skull malformations in infants: brachycephaly, scaphocephaly and craniosynostosis.

Brachycephaly is identified by a flattening of the skull which causes the back of the head to appear taller and the front of the head to look wider. If a child is affected by this condition, the brow may also appear more forward than usual.

Scaphocephaly occurs frequently in premature babies. Also reffered to as a dolichocephaly of prematurity, an infant with this condition will have a long, thin head shape and may also have misaligned ears. This usually self corrects as the baby becomes strong enough to support itself.

Craniosynostosis is an extremely rare condition, prevalent in around 3 in every 10,000 live births. This condition is predominantly caused by the premature fusion of one or more of the sutures (the junctions between the bone plates) in the skull and can only be treated via surgery.

If you are concerned about your baby’s head shape and are seeking advice and support, we have a range of case studies to browse through and a wonderful community of families on Facebook who are happy to discuss and share their experiences.