What is Craniosynostosis and How is it Treated?

Craniosynostosis is often confused with plagiocephaly as they are both conditions that affect the growth and shape of a baby’s head. It is, however, important to understand how to differentiate craniosynostosis as it requires a specialist form of treatment. 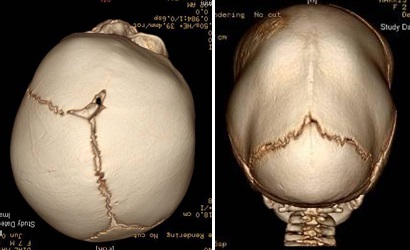 Craniosynostosis in two of the sutures (different patients)

When a baby is born, the anatomy of the newborn skull is specially adapted to allow the child to pass through the tight constraints of the birth canal. In particular, it is the soft and flexible sutures between the bone plates in the skull which help to allow for natural birth. These sutures remain open and flexible until the brain has fully developed where they then become more rigid to form the firm, protective skull covering.

When a baby has craniosynostosis, there is a premature fusion of one or more of the sutures, which, as the skull is unable to grow properly, causes the head to grow to an unusual shape. This happens because the fused suture(s) prevent normal growth in one area causing compensating growth in another area to as the brain develops.

Also known as synostosis, the condition is very rare and reportedly only found in 3 in every 10,000 live births. According to research, plagiocephaly affects almost half of infants to a greater or lesser degree. On average, only one percent of babies with a head shape deformity has craniosynostosis.

The different head shapes resulting from a synostosis depend on which suture is affected. The more common synostotic head shapes include scaphocephaly, frontal plagiocephaly and trigoncephaly.

At Technology in Motion, we see an average of 1 in 100 infants with a head shape that is not typical of deformational plagiocephaly (DP). If we suspect a synostosis, we always refer the child back to their GP for investigation by a neurosurgeon or referral to a UK craniofacial unit. While the TiMband is effective at treating moderate to severe forms of plagiocephaly, it is not recommended for babies suffering from synostosis. Instead, babies with this condition should be placed under the care of a surgical team.

If you suspect that your child has a skull deformity, we offer no obligation appointments in which we will assess your baby’s head shape and advise on options to resolve the problem. To book your appointment today, call 0330 100 1800.