What Happens if You Don’t Treat Flat Head Syndrome?

Does untreated flat head syndrome cause problems later in life?

It’s extremely difficult for parents to gather the sound and unbiased information they need to make informed decisions about treatment. We all want what is best for our children, but with so much conflicting advice from GPs, paediatricians, treatment providers and other mums and dads, how do we know what is best? And with this being a relatively new area of research, can we truly understand the potential flat head syndrome side effects, if we leave it untreated?

According to the NHS, flat head syndrome in babies will nearly always improve by itself with a little help from repositioning and tummy time. However, if the flattening is severe or if the baby is older than 5 months, in our experience this advice doesn’t necessarily hold true.

Specialists say that if adequate correction is going to occur at all, this will happen in the early months while the skull structures are still soft and the joints between the bones are open and flexible. Waiting and seeing or trying repositioning isn’t an option after this time for a moderate or severe flattening. Once a baby reaches 12 to 14 months, the skull starts to harden and any residual deformity can only be treated through surgery, which is potentially very dangerous and will only be recommended in rare cases.

Here we look at the research that has been carried out to date to address the question of what happens if you don’t treat flat head syndrome, helping you to make a decision based purely on the facts.

Does flat head syndrome correct itself?

Flat head syndrome can and does improve by itself; provided the deformity is only mild, it’s noticed early enough and rigorous repositioning is undertaken to prevent the baby from spending too long lying with their head in the same position. However, there are many cases in which flat head syndrome will not improve adequately on its own.

Flat head syndrome pictures of an infant at 5-6 months and 3 years, treated through repositioning. While the head shape has improved to a certain extent, it is still far from being normal. This is likely due to the severity of the deformity.

A moderate or severe deformity will usually require more than repositioning alone in order to be corrected. For babies with conditions such as torticollis, which restricts movement in the neck, it can be difficult if not impossible to reposition at all. 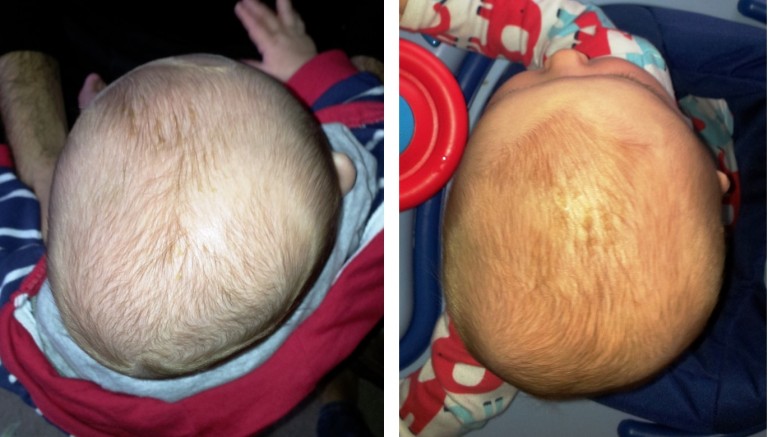 An infant with flat head syndrome before treatment and after just one week in a helmet.

The question is, if plagiocephaly doesn’t always correct itself naturally, why is having a flat head in adults, not more common? Well, flat head syndrome was relatively uncommon until the Back to Sleep campaign of the early 1990s. Since then, its incidence has spiralled to almost 50 percent amongst infants aged 7 to 12 weeks.

Consequently, the effects of this flat head syndrome ‘epidemic’ on the adult population are only now starting to come to light. In our clinics alone, we have noticed a huge upsurge in enquiries from the parents of children aged 2, 3, 4 and 5 and even from teenagers and young adults, asking if we can help to improve untreated plagiocephaly. So, can you fix plagiocephaly in adults? Sadly, all that we can do for these patients is reassure them and suggest that they seek the advice of a psychologist. 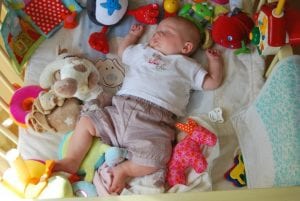 Please note: babies should always be placed on the back to sleep to minimise the risk of Sudden Infant Death Syndrome

Many physicians now agree that babies with moderate or severe flat head syndrome can only be successfully treated using a helmet. But despite widespread recognition from experts in the field, the latest research has garnered little attention from the national press. Official NHS advice is out of date, and the condition still lacks a definitive standard of care that is applicable on a national scale.

What if you leave flat head syndrome untreated?

There are a number of differing opinions on the medical effects of leaving a misshapen head untreated. Most will argue that in non-severe cases flat head syndrome side effects do not include causing brain damage and will not hinder brain development. However, recent research has suggested otherwise as discussed below. There are also a number of other repercussions to not treating flat head syndrome:

There is one indisputable practical outcome of leaving flat head syndrome untreated, which is the issue of being unable to wear many types of protective headwear. Whether it’s for leisure (cycling, horse riding or rock climbing) or for work (construction, the armed forces or the emergency services), helmets are only made to fit heads of a ‘normal’ shape.

A psychosocial consequence of having an ‘abnormal’ head shape is the emotional difficulties that a person might face throughout childhood and possibly into later life. We know from evolutionary theory and everyday experience that we automatically make assumptions about people based on physical appearance, and it takes a conscious effort to disregard these innate misconceptions.

Research has shown that people with symmetrical features are considered more attractive and more intelligent than those with asymmetrical features. Even if one should ignore these automatic responses, there may still be peers, teachers and caregivers who will react negatively to an abnormality, perhaps viewing affected individuals as less intelligent and even teasing or bullying them.

Many of the older children and teenagers who contact us feel let down by their doctors and report to us that they feel socially alienated as a result of their unusual head shapes. They feel that they are unable to wear certain hairstyles, opting instead to conceal the deformity as best they can. Sadly, in some cases, their lack of confidence is impacting on their ability to socialise and preventing them from doing what they want to do in life.

Craniofacial abnormalities have also been associated with increased need for special services at school age, jaw asymmetry and TMJ, scoliosis, sleep apnea, visual defects and middle ear abnormalities, which can potentially impact on hearing and other aspects of child development.

Should you treat your child’s flat head syndrome?

The short answer to the question what happens if you don’t treat flat head syndrome? Is that if moderate or severe, it probably won’t improve to any great extent by itself. Self correction depends on several factors, including age, the severity of the condition and the degree to which repositioning is successfully implemented.

When weighing up the benefits of a helmet against the impact of leaving flat head syndrome untreated, many parents and professionals remain sceptical. However, as the population group affected by the Back to Sleep campaign reaches maturity, the physical, psychological and practical consequences of leaving nature to take its course becomes increasingly clear.

Today, more and more parents are opting to go down the helmet route. Despite the NHS’s standard ‘wait and see’ advice, we have even seen a rise in the number of medical professionals bringing their own babies in for treatment. The advice ‘it’s “only” cosmetic’ may reassure us that there is no underlying disease, but it doesn’t address the psychological and social issues that play such an important role in enabling an individual to integrate into wider society.

The best piece of advice that we can give you is to follow your parental instincts rather than allowing yourself to be pressured into making a decision. After all, they’re there for a reason, and only you can know what is best for your child.

If you would like to know more about the treatment options for flat head syndrome, call Technology in Motion on 0113 218 8030. We’ll answer any questions you might have and, if you wish, book a no-obligation assessment at your nearest clinic to see if your baby could benefit from a helmet.