What Causes Craniosynostosis? - Technology in Motion

It’s estimated that approximately 1 in 2,500 infants are born this a craniosynostosis and really the causes of synostosis are not fully known.

The word craniosynostosis is made up of 3 parts;

We’re born with bones which are flexible and able to be moulded during birth and the skull is made up of flexible, quite soft bones connected by fibrous seams known as sutures between them. Where three or four bones meet there are wider fontanelles which close in the first two or three years. As we grow throughout childhood the sutures remain open, able to accommodate the growing brain and face as we develop.

In a craniosynostosis one or more of the sutures closes or ‘fuses’ too early this is unexpected and can lead to complications as the baby grows. 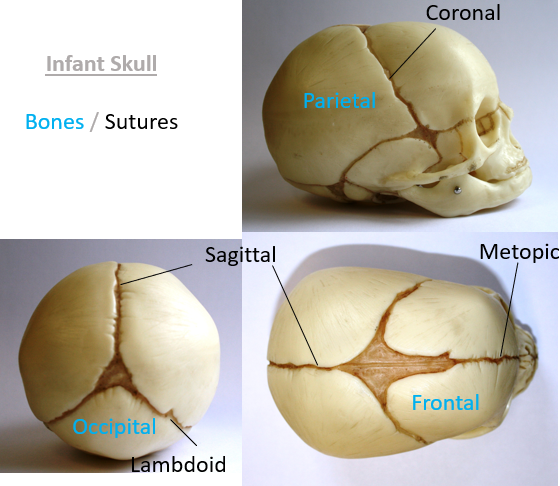 As we grow all of our bones remain flexible, each with its own growth plate or growth areas to allow the skeleton to develop normally. In the long bones of the arms and the legs these plates are close to one end of the bone. In the wide flat bones, such as the bones of the skull the fibrous sutures do this work allowing the bones to gradually separate so that the brain can grow.

Sometimes, these growth areas don’t work properly and they can fuse before they should. This is what happens in craniosynostosis.

If one of the sutures is prematurely closed the head can’t grow as it should in that area, causing deformity and potential increase in pressure on the growing brain.

So what causes craniosynostosis? Really, the causes of craniosynostosis in most infants are unknown. About 20% of infants have a genetic source which can result in syndromes such as Pfeifer, Crouzon, or Apert syndrome. All of which are rare.

Most cases are thought to be caused by several factors such as a single gene code combined with something that the mother encounters in her environment, such as medications, foods or drinks or underlying maternal health challenges during pregnancy.

If it’s not been picked up by the pre-birth scans a synostosis is usually, but not always picked up immediately after the birth. Sometimes it can be missed and it’s diagnosed later in life.

The first signs can be a misshapen skull and craniosynostosis can be confused with deformational plagiocephaly. The shape that is seen in clinic is very different in a plagiocephaly than a synostosis and it’s immediately obvious which type of condition it is and this can be confirmed by simple measurements.

Other indicators of craniosynostosis can be an absent fontanelle (soft spot); a raised bony line under the skin where the suture has closed, slow head growth, a lethargic baby or one which suddenly cries out as if in pain.

If a clinician or doctor suspects a synostosis the first test that can be used to confirm this is an x-ray or CT scan which shows the underlying structures of the skull.

The common types of synostosis occur in the higher part of the skull, this area is called the skull vault and this area protects the brain.

Sagittal Suture: This is the most common type of craniosynostosis and it stops the head from growing in width. So a long thin head shape, often with an over developed brow and occiput is the result.

Bi-coronal Suture: Both coronal sutures are closed. The head can’t grow front to back so can be become very tall with a high forehead. The head might also look comparatively wide.

Metopic Suture: The brow can’t grow in width so looks very pointed and narrow. The eyes can look pinched towards the centre of the head. 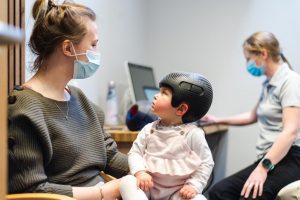 To correct a craniosynostosis, surgery is required. There are two types of surgery and the baby can be monitored up to the age of 18 to 24 months. In this time if surgery is indicated a craniofacial surgeon will remodel the upper part of the skull.  is remodelled in surgery. If the baby has a genetic syndrome, surgery is planned as part of the overall treatment.

More recently endoscopic surgery is becoming more routine and in the UK this type of surgery can be offered. Surgery is done at a younger age, ideally under 4 months old and it’s much less invasive with less blood loss, shorter operation time and less time in hospital after the operation. A camera is inserted under the skin and the fused suture is cut open or totally removed allowing the skull to then remodel as the baby grows. After surgery, a scan photograph of the baby’s head is taken and a helmet is made which has been designed to allow the head to grow back into a normal shape over the coming months.

Known as Endoscopic Suturectomy with Postoperative Helmeting (ESCH) this treatment is recognised to be less stressful on the infant, giving good results.

Technology in Motion is working with its international clinical and medical partners to bring the TiMbandAid CS treatment to the UK. Working with the UK major craniofacial centres the Company is at the forefront of these developments.

For more information on this service, contact us at [email protected], call 0330 100 1800 or see www.technologyinmotion.com