Scaphocephaly is the word used to describe a narrow head shape and can be associated with flat head syndrome. The umbrella term for a long thin head shape is referred to as dolichocephaly. Scaphocephaly is caused by the early fusion of the sagittal suture which runs from front to back at the top of the skull. Early fusion of a suture in infancy is called synostosis and this type is the most common form of craniosynostosis.

What is Scaphocephaly and What Causes it?

Unlike other forms of flat head syndrome such as plagiocephaly, scaphocephaly is usually diagnosed as a congenital condition and is often present at birth. The flexible joints in a baby’s skull, made from ligamentous tissue are known as sutures and these will eventually become rigid in early adulthood as the child grows. The sutures normally remain open and flexible, allowing the brain to grow as it should during early infancy. If there is synostosis of one or more sutures, this will restrict the growth in one part of the skull, resulting in deformed head shape. Although this may not be noticeable immediately after birth, the deformity will become more noticeable as the brain grows.

One of the most common signs of scaphocephaly is an elongated head shape, with the sides of the skull appearing narrow and the forehead prominent when looking down. The sagittal suture is the long suture which runs from the front to the back of the head, and if this suture is fused too quickly, the result is a long, thin head shape.

Pronounced (scafe-oh-kef-aly) the name scaphocephaly is derived from the Greek word skaphe which means a light rowing boat or skiff and kephale which means head. Together, the term describes a long narrow head shape which resembles the underside of a boat.

Other common signs of scaphocephaly are an over-developed brow at the front and an overdeveloped occipital area at the back of the head. If you look at scaphocephaly images, the symptoms can be clearly seen and may be helpful as a reference point. 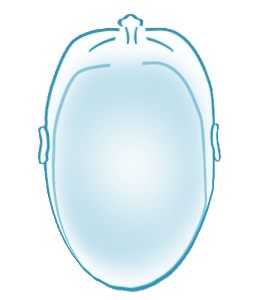 If you suspect that your baby has a scaphocephaly or any other synostosis, cranial remoulding therapy is not indicated at all. In our clinics we expect to see approximately one in a hundred infants who have undiagnosed synostosis. If we are at all concerned we will recommend that you seek a referral from your GP for further investigation by a neurosurgeon or craniofacial team.

If there is no synostosis we will be able to offer treatment. If your baby is diagnosed with synostosis, surgery is the most common form of treatment for the condition and your doctors will advise you on the most appropriate treatment.

As research into the condition develops, it’s becoming clear that surgery may not be the only solution in the future. Our recent blog post which explores whether the cause of craniosynostosis is being unlocked spotlights a breakthrough in stem cell research. Scientists have successfully identified and isolated a stem cell population which is capable of skull formation and cranial regeneration which has the power to transform how craniosynostosis is currently treated.