In this post, we explore the research that has been carried out to date in order to investigate the link between plagiocephaly and facial asymmetry. We look at the cosmetic outcomes of craniofacial helmet therapy, as well as some of the potential issues that might arise as a result of having misaligned facial features. After all, is plagiocephaly ‘just cosmetic’ or are effects more complicated than this?

How does asymmetry occur in the jaw and ears, and can it be corrected?

The bones of the skull can be divided into two groups with the upper four bones known as the cranial vault, protecting the brain. The brain sits on the lower bones in the skull and these make up the cranial base. The occipital bone at the back of the head is part of both the vault and the base.

During treatment, the bones of the vault are repositioned and allowed to reform. There is then a secondary effect of allowing the cranial base bones to realign and become decompressed, bringing about some correction in the cranial base.

Treatment using a helmet (e.g. the TiMband) corrects the cranial vault, and we know that this has an effect on the cranial base bones. However, a good osteopath working inside the mouth and around the neck can help bring about increased improvement. This can be done during a course of helmet therapy.

Research on Plagiocephaly and Facial Asymmetry

Many clinicians have observed a high incidence of asymmetry in the lower jaw (AKA mandibular) amongst babies with plagiocephaly. A 2002 study by the American Association of Oral and Maxillofacial Surgeons confirms that jaw asymmetry is secondary to positional head deformity, indicating a likely cause-and-effect relationship.

The research team also investigated the use of plagiocephaly helmets to see if they had any effect on mandibular symmetry. They observed a marked improvement overall, although the positioning of the temporomandibular joint remained the same. (This is the joint that hinges the jaw to the skull and adjacent ear structure.)

A more recent study into plagiocephaly treatment and ear asymmetry indicate that while helmets may not directly influence the position of the temporomandibular joint, they do seem to affect a shift in ear position. Published in the Journal of Craniofacial Surgery, the paper reports an average 30 per cent decrease in ear asymmetry with the correct use of a plagiocephaly helmet.

These before and after scans of one of our patients demonstrate how helmet therapy can improve the alignment of the facial features.

A study published in 2015, the biggest of its kind so far, investigated the effectiveness of plagiocephaly helmets in the correction of mid-facial and cranial asymmetry. Measurements were taken before and after treatment, at the eye and forehead level, and also around the ears to determine their relative positions.

The research team found helmet therapy to be effective in the treatment of both cranial and mid-facial asymmetries. The greatest degree of improvement was found in patients of less than one year of age, although older patients did show some improvement. 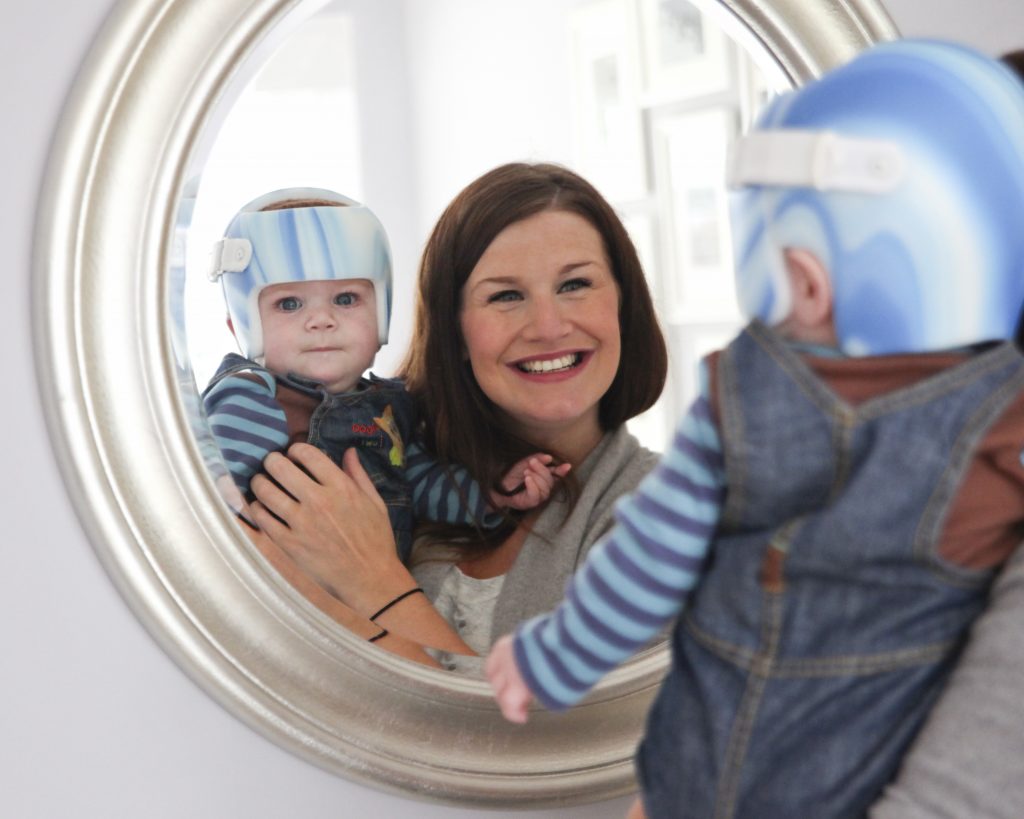 The latest study provides the most convincing evidence to date that plagiocephaly helmets can help correct facial asymmetry. But does it really matter?

Of course, the psychosocial issues associated with having ‘abnormal’ facial features should not be taken lightly, and nor should potential practical problems such as being unable to wear glasses. But does facial misalignment increase the risk of other issues, such as poor eyesight and hearing?

Occipital plagiocephaly often causes the forehead to protrude on the side of the flattening, making one eye look bigger than the other. Many parents also report what looks like eye misalignment (strabismus), but according to professional opinion, this may be an illusion caused by the asymmetrical placement of the eyes (pseudostrabismus) – at least in the case of regular deformational plagiocephaly (as opposed to craniosynostosis).

The Center for Genetic Eye Disease reports a high level of astigmatism (blurred vision) amongst patients with plagiocephaly. However, they also point out that further research is needed to ascertain whether or not children with plagiocephaly are at higher risk than the general population.

It is also unclear as to what extent plagiocephaly helmets can correct these problems. However, since babies are thought to develop adult-standard 20/20 vision by the age of six months, one might not expect to see a great deal of improvement.

Research suggests that there may also be a link between plagiocephaly and otitis media (infection of the middle ear). A high incidence of the condition amongst children with a cleft palate led researchers to wonder whether this trend might be extended to other conditions involving structural abnormality in the middle ear.

Whilst the rate of ear infection in babies with plagiocephaly was not significantly different from the population norm, its incidence did correlate directly with the severity of the cranial deformity. Given the potential impact on hearing and other aspects of child development, this is certainly something that parents need to be aware of.

Sadly, limited research has prevented this kind of information from entering the mainstream, and many parents remain unaware of the risks until it is too late.

What Should You Do?

As a parent, you should keep an eye out for any obvious facial asymmetry and remain vigilant of the potential risk factors. Be sure to raise any particular concerns with your GP, and if you feel that your child might benefit from a plagiocephaly helmet, call Technology in Motion on 0330 100 1800 to arrange a free no-obligation appointment with a clinician.