Helmet Treatment for Babies: Why the Controversy?

The subject of flat head syndrome has been dividing the medical community both in the UK and internationally since the Back to Sleep Campaign of 1992 saw its incidence rise. There are two distinct schools of thought: advocates of ‘it’s only cosmetic’, and those recommending specialist treatments, such as baby helmet therapy.

The growing discrepancy between these two schools of thought can give rise to feelings of frustration, doubt and inadequacy amongst new parents with the media picking up on the apparent failings of the hard-pressed NHS. You can read more about why you can’t get a plagiocephaly helmet on the NHS in our previous blog post.

Plagiocephaly research relating to the treatment of flat heads in infants has been, to some extent contradictory, making it difficult if not impossible, to establish a set of protocols for advice. However, recent evidence.1 has painted a clearer picture, calling for the urgent revision of advice and treatment regimes.

The ‘epidemic’ of positional plagiocephaly

In 1992, it was estimated that 3 in 100 infants had positional plagiocephaly.2 Further research3 confirms that this figure remains the same through to at least the age of 4, and many doctors have recently reported an increase in the number of parents seeking advice after this age on what to do to help resolve the deformity.

A 2013 study suggests that the incidence of plagiocephaly in infants at 7 to 12 weeks may now be as high as 46.6 per cent,4 which is generally attributed to an increasing number of babies sleeping in the supine position following the very successful Back to Sleep advice. 5,6,7 There is now a growing concern that this rationale is causing some parents to ignore the Back to Sleep advice, which makes no mention of tummy time during the day, in an attempt to prevent their infants from developing a flattening on the head. Find out more about tummy time in the tummy time guide for parents.

The NHS website states that the skull corrects itself naturally over time provided the right measures are taken early on. These measures involve removing pressure from the flattened part of the head and encouraging the infant to try different positions.8 It goes on to say that cranial orthoses improve the symmetry of the skull but calls their use ‘controversial’, citing a lack of evidence for their effectiveness in relation to repositioning therapy.

Whilst repositioning can be effective in the reducing the severity of flat head syndrome, many infants develop deformities of such severity that these strategies will be inadequate in resolving them, even if their parents have been fully counselled on their implementation.3,9

A 2015 study,9 the largest of its kind to date, compared the effectiveness of conservative (repositioning) and baby helmet therapy for positional plagiocephaly in over 4,000 infants. Protocols for treatment were that all infants would be treated with repositioning and if necessary, active management of torticollis. In the conservatively treated group, full correction was achieved in 77.1 per cent of infants with 15.8 per cent requiring transition to helmet therapy. A further 7.1 per cent who did not proceed to helmet treatment ultimately displayed incomplete correction.

By contrast, 94.4 per cent of infants using a helmet as first-line therapy achieved correction, as did 96.1 per cent of those who received helmets after failed repositioning.

Compare these results with the aberrant report10 published in the British Medical Journal in 2014, which concluded that baby helmet therapy is no more effective than leaving the deformation to follow its natural course:

‘…helmet therapy has no added value in the treatment of moderate to severe skull deformation in healthy infants.’

Despite this bold statement, there are several concerns regarding the methodology of the study and the presentation of the data:

In essence, data reporting was highly selective and averaged out, masking the individual improvement that infants may (or may not) have achieved.

Nevertheless, and despite numerous rebuttals from experts in the field, this damning reporting of the ineffectiveness of baby helmet therapy in the research group has mistakenly been taken as evidence that all such treatments are unsuccessful.11,12

In their clinical guidelines on the prevention and management of positional skull deformities,13 the American Academy of Pediatrics recommends educating parents during the newborn period on methods to minimise the risk of a plagiocephaly developing. These include placing the infant in the prone position whilst awake and alternating the supine head position during sleep.

The positioning of the ears and cheekbones should be examined at birth and at every check within the first year. Any head tilt should be identified along with facial abnormalities such as contralateral flattening, and a full examination of range of movement in the neck performed to rule out torticollis.

Argenta5 described 5 grades of asymmetric deformity for identifying plagiocephaly (Figure 1) and 3 grades of posterior flattening for brachycephaly (Figure 2). Most infants present with a ‘combination’ of the two types of deformity. 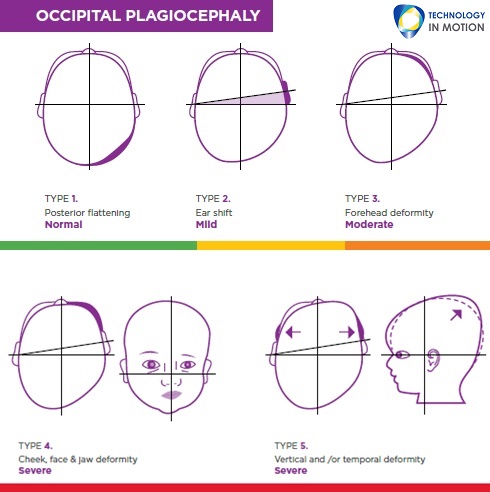 Diagnosis of plagiocephaly should be based on the infant’s history and presentation. If an infant has a typically oval or egg-shaped head at birth and later develops a flattening, this is likely to be deformational plagiocephaly.

Where plagiocephaly has developed, repositioning strategies must be employed over a minimum of one month to minimise progression. The head shape should be monitored to ensure improvement by the time the infant is able to sit, crawl and spend less time in the supine position. Please read our repositioning guide for further information on repositioning techniques.

If the deformity progresses or fails to improve after a month of repositioning, or if the child is over 5 months of age, it is doubtful that it will spontaneously resolve later. Head growth should be monitored and if there are other concerns, a referral to a paediatrician will eliminate any underlying issues.

However, investigation will not correct a deformity. This is usually the parent’s main concern and when an infant reaches 14 months, the potential for correction with a helmet becomes very limited. Baby helmet therapy requires active growth to bring about correction and 4 to 7 months is the ideal age to start treatment. There is less improvement available as the child ages to a maximum cut-off of 14 months for the start of treatment. After this, the window of opportunity closes and surgery is the only option if treatment is required. Progression of recommendations is shown in the table below.

A head shape deformity can also be indicative of psychomotor and educational delays, which can be prevented or reduced in impact if addressed early. It is therefore recommended that infants with a head shape deformity be monitored and compared to the normal developmental milestones. 16

For more information to answer any questions, such as ‘do baby helmets work?’ please read our blog post on the effectiveness of helmet therapy.

Steve Mottram is a Consultant Orthotist and Managing Director at Technology in Motion, a network of UK orthotic clinics specialising in the field of flat head syndrome correction. Visit the Technology in Motion website or call 0330 100 1800 for more information.

6 Turk A, McCarthy J, Thorne C, Wissoff J. The “back to sleep campaign” and deformational plagiocephaly: is there a cause for concern? J Craniofac Surg, 1996;7:12-18