Brain Imaging of Craniosynostosis and Plagiocephaly

Brain Imaging of Children with Craniosynostosis and Plagiocephaly

Study to investigate the behavioural, cognitive and neurological impairments associated with craniosynostosis and plagiocephaly

In 2012, we received a piece of news regarding USA research on craniosynostosis and plagiocephaly. This article highlighted the Department of Pediatric Psychiatry at Seattle Children’s Hospital’s participation in an NIH-funded study of the neurobehavioral correlates of craniosynostosis.

Craniosynostosis is a craniofacial disorder, characterized by the premature fusion of two adjoining plates of the skull, which result in malformations and dysmorphology of the head in the absence of corrective surgery. For more information on what craniosynostosis is, as well as symptoms and treatment, please read our dedicated page based entirely on craniosynostosis. 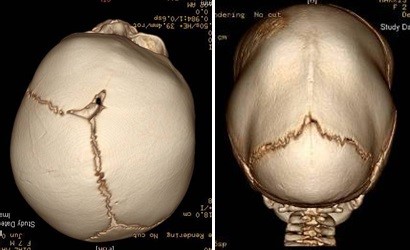 In the study, infants with craniosynostosis were followed post-surgically to determine whether there were any cognitive, behavioural, or neurological impairments associated with the condition. Dr. Aylward performed MRI measurements on brain scans from these children, now seven years of age, to ascertain whether any brain malformations could be identified and, if so, how they relate to behavioural, cognitive, and neurological impairments.

Another facet of this NIH-funded study involved the investigation of neurodevelopment in babies with deformational plagiocephaly, another craniofacial disorder that involves cranial asymmetry attributable to external forces (prenatal or postnatal) that shape the malleable infant skull. To achieve this, Dr. Aylward conducted MRI scans on a subgroup of children with the condition.

Although deformational plagiocephaly is dismissed by British medical institutions such as the NHS as a benign and purely cosmetic condition, emerging evidence suggests that infants with the condition may be more at risk of developmental delays, particularly in regards to language and cognition. The original article can be found here.

Can skull malformations impact children in any other way?

More recently, comparative studies have suggested that children with severe levels of deformational plagiocephaly are more likely to suffer from visual defects such as strabismus (eye misalignment) and anisometropia (significantly different prescriptions in both eyes) when compared to their unaffected peers. Although a causal link between the condition and visual defects has not been definitively established, the skull malformation and facial asymmetry associated with deformational plagiocephaly suggests that there is a relationship between the two.

What treatment is available for babies with craniosynostosis and plagiocephaly?

Craniosynostosis is a condition which affects around 3 in every 10,000 births. Typically, this condition is corrected via surgery during the child’s first year. Without surgery, the condition may worsen over time, causing further malformation to the skull. To investigate and treat this condition, you should speak to your nearest craniofacial unit.

Technology in Motion provides cranial remoulding helmets for any babies who have had an endoscopic strip craniectomy or craniotomy as treatment for craniosynostosis. Working the same way as the flat head syndrome helmets do, this cranial remoulding treatment is essential to ensure that after surgery the baby’s head is able to grow in a way that normalises the shape. If a helmet is not used after this type of surgery, it could result in the baby’s had grown in an abnormal shape.

Deformational plagiocephaly, otherwise referred to as positional plagiocephaly, affects roughly half of all babies under the age of 1 to some extent. For mild cases of plagiocephaly, repositioning techniques are advised (see our repositioning guide for helpful advice). However, if your child displays moderate to severe levels of the condition, a cranial remoulding helmet is commonly prescribed. These helmets, such as the TiMband, work by gently encouraging growth to the flattened areas of the head.

If you have noticed an asymmetry or flattening of your baby’s head and would like to take advantage of one of our free, no-obligation assessments, contact us today or visit us at one of our many locations across the UK.