Holding the NHS to Account for Advice on Flat Head Syndrome

Flat head syndrome has long been an area of debate amongst medical professionals, with some insisting that the condition is simply cosmetic and others arguing that the condition is of medical concern, as it can affect individuals later in life. The proof, much like any other condition, comes from more in-depth research and studies which are being undertaken every year. Despite the fact more evidence is emerging, the NHS refuses to acknowledge the latest research, giving the same advice as it has been giving for many years.

In addition, the NHS doesn’t recommend helmet therapy for plagiocephaly and brachycephaly for the reasons below; implying the helmets are painful, can cause distress and aren’t guaranteed to work stating that:

1. These devices apply pressure to “bulging” parts of the skull.

2. They may be uncomfortable and distressing for your baby.

3. There isn’t clear evidence to suggest they work.

The NHS has based their advice and policies regarding flat head syndrome, which is not to provide helmet therapy or any other treatment, on the basis of one single piece of research by Renska Van Wijk. Published in 2014, Renska was researching for her PhD at the time, she concluded at the end of the study the change found in a group of babies who had helmet therapy and those that didn’t, were equal. Therefore, concluding helmet therapy should be discouraged as a standard treatment for healthy infants with moderate to severe skull deformation.

However, there are a few significant factors which need to be considered with this study. Firstly, this ‘open source’ paper was funded on the premise that the research data is freely available for other researchers to access, however, the author has since denied access to her data.

On examination, the study was looking for 200 infants to be assigned to a treated and a non treated group and 403 infants were chosen. Of these only 84 parents agreed to allow their infants to be entered into the trial, 42 for each group.

Of the ‘treated’ group, only 30 were actually provided with helmet treatment as some parents decided not to take up treatment. 22 parents reported problems with the fitting of the helmet and 20 abandoned treatment before the predicted end of treatment. Leaving 10 infants in the fully treated group.

These 10 infants were treated across 4 locations using two different types of helmet and this eventually became essentially a minimal patient case study. It’s worth noting that one of the manufacturers immediately stopped providing their product on the release of the report. It’s not surprising therefore to note that the two groups, treated and non-treated, demonstrated a similar result. These helmets were labelled as ‘ineffective’, however, the treatment process and the helmets used in the report were not monitored.

For Technology in Motion, the report has one critical conclusion, up until the age of 24 months moderate head shapes will naturally improve, but only marginally (2.6% for plagiocephaly and 5.4% brachycephaly). Whilst this is encouraging for parents, this is not nearly enough to correct the severely deformed head shapes that we regularly see at our clinics.

The report also notes that 75% of the infants that took part in the study continued to have a persistent skull shape deformity. The NHS seems fixated on the fact that there was an equal measure of change between the two groups, during the time period of the study, using it as justification by stating there isn’t clear evidence to indicate helmet therapy works. Yet they fail to take into consideration that an astonishing 75% of these infants still had skull deformities, having the option of helmet therapy taken away from them, as they have surpassed the age of when treatment is effective.

On the back of the policy and advice from the NHS, we find there is often questioning and concern regarding the safety of baby helmets from parents and carers. Recent evidence, by the authors of a study on the Journal of Neurosurgery, reveals that there is no evidence to suggest that helmet therapy is associated with cranial constriction. This reassures healthcare providers and families that appropriate treatment for DPB (deformational plagiocephaly/brachycephaly) can be chosen, without concern for potential negative effects on cranial growth.

Taking helmet therapy out of the picture for a moment, you may be concerned as to whether plagiocephaly or head shape deformity affects brain function or increases cognitive risk. You’ll be pleased to know that there is very encouraging evidence to suggest that neither are a risk. A study showing encouraging research to indicate that a head shape deformity does not directly affect brain function can be viewed via ScienceDirect.  Furthermore, a study published in 2018 by Christian Linz and Tilmann Schweitzer, concluded that there were no supporting arguments to suggest that DP is a cognitive risk condition.

At Technology in Motion we find that this helps us to reassure parents who are initially concerned as to what causes flat head syndrome, ensuring that they are not to blame and also that helmet therapy is in fact perfectly safe.

The evidence that helmet therapy does work

Finally, despite the NHS’s advice and policies, there most definitely is evidence to suggest that helmet therapy does work and is, in fact, an effective form of treatment in infants.

For brachycephaly specifically, a paper published in 2018 titled Helmet Treatment of Infants with Deformational Brachycephaly, concluded that cranial orthosis is successful in the treatment of deformational brachycephaly. It also demonstrated that entrance age for helmet therapy is a critical variable in the overall effectiveness of treatment, with younger infants demonstrating both improved outcomes and shorter treatment times. This supports our advice to parents, explaining why there is an optimal age and a specific window in an infant’s early life to undergo treatment. This evidence overall determines that helmet therapy can be used to effectively and successfully treat brachycephaly, as well as plagiocephaly.

Moreover, there is specific data which shows what percentage of infants will go on to have a severely deformed head shape, if treatment isn’t pursued. These statistics are shown across two studies which are linked, the first paper follows infants in the first two years of life in relation to the development of brachycephaly and plagiocephaly. The follow-up paper then revisits the participants at ages 3-4. The standout conclusion from both of these papers, for us particularly, is that 3-4% (1 in 25 infants of the population) who have a severe head shape at 2 will still have a severely deformed head shape at age 3 and 4. Thus, demonstrating that not all cases of flat head syndrome will correct itself and in terms of the whole population of infants, 1 in 25 is a considerable amount.

There is a wealth of research out there and more studies being undertaken every year. We find it difficult to understand why the NHS is still insistent on using one weak study as the main basis for their policy and advice to parents, many of which who are concerned and looking for non-bias guidance on what to do next.

We always recommend to parents to try repositioning techniques until the age of 4 months if their child has a flat head. You can find our repositioning guide on our website. It’s only after 4 months if these techniques have little success that we advise helmet therapy, with the optimal age for this being 4-7 months. However, helmet therapy can be given up to 14 months of age, after that the baby’s skull begins to harden. 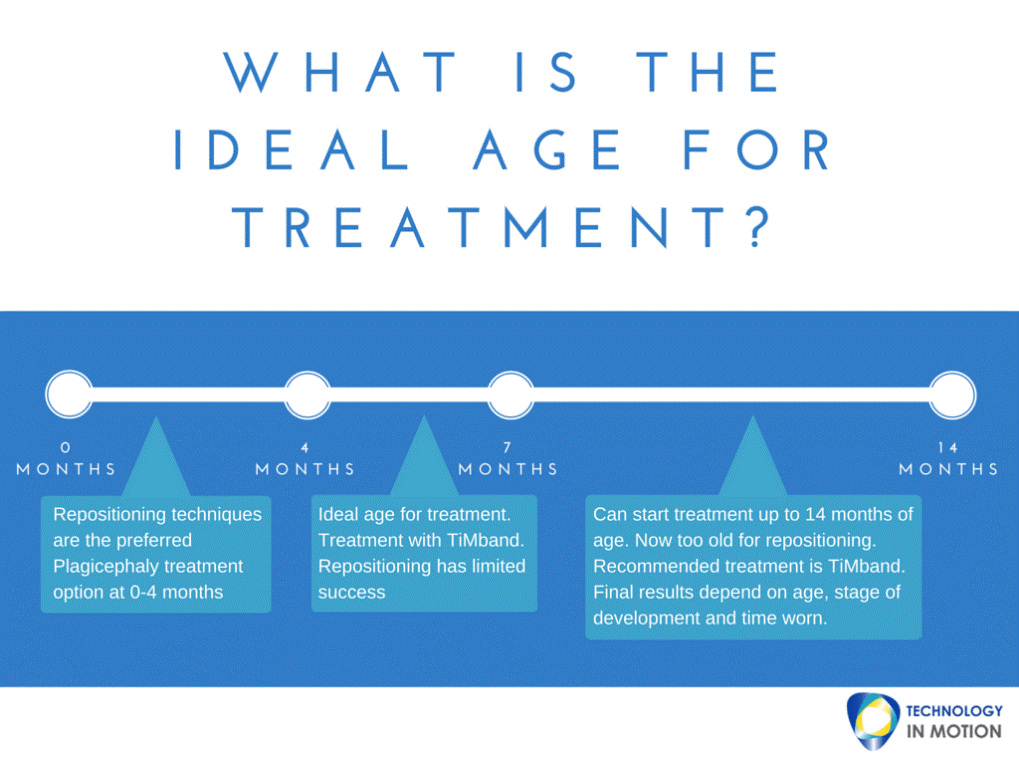 If you have any questions relating to flat head syndrome or any of the points covered in this piece, please feel free to contact us on 0330 100 1800. If you are concerned about your own infant’s flat head shape, book a free consultation at your nearest clinic. We can determine the severity of your child’s head shape and discuss the next steps for your family together.